(There is a link to a high-res copy of our logo at the bottom of this page...)

This specification was developed by NZART Council in 1982

In a recent letter to me, Len ZL1AC writes : " Tom Clarkson ZL1FQ now ZL2AZ proposed that we adopt this emblem at the inaugural meeting of NZART (16th August 1926). It was of course based on the ARRL diamond except that the letters were changed. Tom proposed that we adopt a counterpoise in place of the earth in the ARRL diamond because counterpoises had largely been promoted by New Zealand amateurs. Tom produced a drawing of his emblem at the meeting.

So that is how it all began. Tom ZL2AZ himself takes up the story in a letter: "I had an ARRL lapel badge and this was used as a pattern. I associate Norm Edwards ZL1AA with actually negotiating the manufacture. When available, the committee members soon adopted their use so the one I got was one of the first half dozen distributed. The first badge design had a three turn inductance, and with age the letters are now brassy. It is made as a tie-pin, with a shank two inches long, the pin part being rifled. On the back it has the makers name, "Young & Co, Auckland".

This is the badge that Tom ZL2AZ presented to NZART at the 1982 Conference at Napier - his original NZART badge, from the designer of the badge himself, and the originator of the name of our Association, a Founder-Member. In receiving the badge and thanking Tom the President, Jumbo Zl1HV, on behalf of NZART, stated that the badge would be suitably mounted and retained at the new NZART Headquarters at Upper Hutt as the start of a collection of items with historical Association connections. Badges for members were advertised in the April 1928 issue of "Break-In" for 3/6d (35c) post paid, the price later reduced to 2/6d (25c). The badge made its first appearance on the front page of "Break-In" from the May 1928 issue. This had a white background and the inductance direction was reversed.

On 12 April 1928 the Executive Committee approved the purchase of 5,000 NZART "stickers" in the form and size of the badge. The price quoted was 2/- (20c) per hundred but this was later reduced to 1/6d (15c). The inductor on the sticker was two turns in the original direction. The stickers were imported from England.

The "Radio Emergency Corps" scroll appeared in the March 1933 issue of "Break-In".

The scroll for member's callsigns appeared in the September 1933 issue and has remain unchanged since then.

In the 1930's and 1940's the badges available to members were black and gold or black and chrome with either brooch or stud holders. The chrome version was listed as more expensive and seems to have survived through greater demand. A rubber stamp version was also available. The red background for Life Members dates from about 1946. A special and unique once-only badge with a blue background was made and presented to newly-elected Life Member Bill Hall ZL2BH at his bedside in 1950.

An all-gold badge to denote the President of NZART was introduced by ZL1HV at the Upper Hutt conference in 1979. It will be presented to the Association at the end of his service of President, to be handed down the line of Presidents of the New Zealand Association of Radio Transmitters. A special emblem, to denote 50 years of service by the Amateur Radio Emergency Corps was used in conjunction with the 1982 Napier AREC 50 Conference. This emblem used an earth in place of the counterpoise with artistic licence.

At its meeting on 7th July 1982 in Napier, NZART Council decided that in view of the increasing size and stature of the Association, the badge should be standardised and if possible protected by registration with NZART

A badge for members who have given extra meritorious service has a Green background.

In 1993 Council approved the use of a badge with a Peacock Blue background for members of OTC.

The NZART Badge and Emblem

The NZART Badge (first developed in 1926) comprises a diamond emblem, one unit wide, 2.1 units high, with white or silver lettering and lines on a black background.

The symbol for an aerial (two completed triangles), an inductor (two and one half turns in an anticlockwise direction, descending), and a counterpoise (three radial lines with tips in line) appear neatly between the letters NZ (0.13 units high) and T (0.2 units high) with the letters A and R (0.16 units high) to the left and the right of the inductor, respectively. All lines and lettering are 0.02 units thick. The inductor to fit a rectangle 0.18 by 0.32 units. The counterpoise dimensions to be the same as the aerial 0.3 units wide by 0.14 units high.

The diamond is outlined with an enclosing line.

The points of the diamond may be sharp, or alternatively rounded. If rounded, the reduction at the widest point to be 0.05 units and 0.07 units at the top and bottom points. 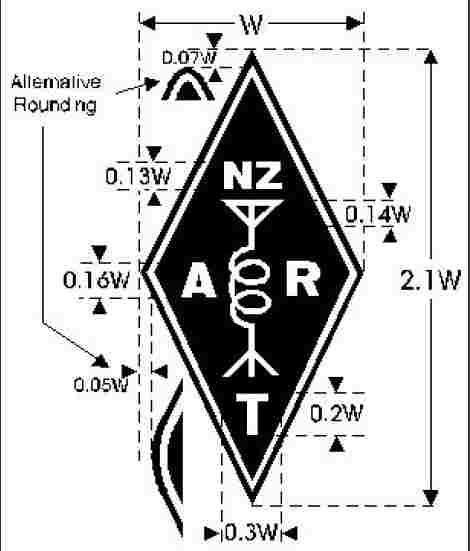 The images below shows the variations of the NZART badge. 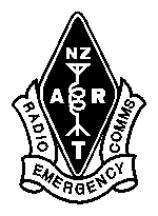